Dan Walker, 42, took to Twitter to send his well wishes to the former athlete Michael Johnson, 51, who suffered a stroke last year. In view of his 574,000 followers, the BBC Breakfast presenter said: “Michael. I was obsessed with watching you in your professional prime and, like many others, I was totally shocked by what happened to you last year. “The way you have come back from that, with the help of others, is just as inspirational as anything you did on the track.” The BBC host’s message comes after Michael took to the micro-blogging site to thank his fans for their kind words during his recovery. 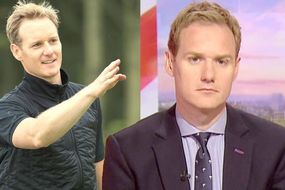 In view of his 98,000 followers, Michael wrote: “So many kind words yesterday! Recovery was difficult. I’m no stranger to hard work. But this required me to accept being physically weak and allowing others to help me. With support, a winning mindset, AND a willingness to confront our own shortcomings we can overcome anything!”

The former Olympic champion and BBC sports correspondent had shared a side-by-side video of himself where he was back running following his stroke in September, last year.

He captioned the clip: “A year ago today I was unable to walk having suffered a stroke. Thanks to the mindset learned as an Olympian, 2 months later I was back running! Today I’m thankful to my family, friends, fans, and @mjp360 for the incredible support! #strokesurvivor #health #Olympics #motivation.”

Dan took the opportunity to also repost the video and added the caption: “Incredible.”

Fans flocked to comment on the post, as one person said: “True Olympian spirit! Great to see @MJGold back on our screens and

PREV Everything you need to know about the cast of #Greenleaf
NEXT 'I was turning to drink' One Show host Alex Scott opens up about trolling in ...