EMMERDALE teenager Jacob Gallagher hasn’t had the easiest time in the village of late after being abused by Maya Stepney. However, will he flee the Dales as his loved ones make a devastating discovery?

Jacob (played by Joe-Warren Plant) has been coming to terms with the loss of illicit lover Maya (Louisa Clein) after she was sentenced to 12 months behind bars after abusing the Emmerdale teenager earlier this year.

The youngster’s ordeal has had a huge impact on him, having suffered low GCSE grades as a result of his mind being distracted and cutting himself off from his loved ones on the ITV soap.

One villager who has tried to help Jacob has been Liv Flaherty (Isobel Steel) who was the first character to discover what evil Maya was up to.

After she suffered from a seizure earlier this week, Jacob told Liv he would stand by her more as she had done for him, but could the youngster be left heartbroken as the school boy goes back on his word and leaves the village for good? 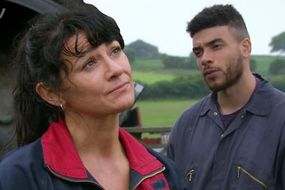 Emmerdale fans distracted by blunders in Moira and Nate's scenes

Jacob will tell the pair he is adamant to keep his life on hold and wait for Maya to return after he has been contacting her from behind bars.

After his parents shocking discovery and despite Jacob making a promise to Liv to stick by her when she needs him most, will his obsession over Maya bridge a greater wedge between the youngsters?

The teenager’s determination to be with Maya could see him go as far as to flee the village to be with the child groomer.

However, will Liv persuade him their friendship is greater than his love for the former school teacher and remind him of his promise to her?

Earlier this week, Liv collapsed whilst out with Jacob, who was the one to realise there was something wrong with the youngster.