The hurricane is expected to batter the islands with up to two days of torrential rain, high waves and damaging winds. The hurricane is closing in on the northern Bahamas, threatening to batter islands with Category 5-strength winds, pounding waves and torrential rain. The National Hurricane Centre in Miami said Dorian's maximum sustained winds have increased to 180mph, up from 175mph and it is moving west at 7mph. 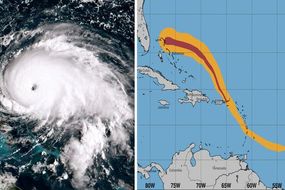 "Devastating hurricane conditions" are expected in the Abaco Islands early on Sunday and across Grand Bahama island later in the day, the centre said.

Millions from Florida to the Carolinas kept a wary eye on Dorian, meanwhile, amid indications it would move sharply north-eastward after passing the Bahamas and track up the US south east seaboard.

But authorities warned even if its core did not make US landfall and stayed offshore, the potent storm was likely to hammer US coastal areas with powerful winds and heavy surf.

In the northern stretches of the Bahamas archipelago, hotels closed, residents boarded up homes and officials hired boats to move people from low-lying areas to bigger islands as Dorian approached.

Hurricane Dorian has made landfall in the Bahamas (Image: PSCP.TV)

Bahamas Prime Minister Hubert Minnis warned that Dorian is a "dangerous storm" and said any "who do not evacuate are placing themselves in extreme danger and can expect a catastrophic consequence".

Small skiffs shuttled between outlying fishing communities and McLean's Town, a settlement of a few dozen homes at the eastern end of Grand Bahama island, about 150 miles from Florida's Atlantic coast.

Most people came from Sweeting Cay, a fishing town of a few hundred people about 5ft above sea level.

The eye of the storm is causing life-threatening conditions (Image: NOAA) 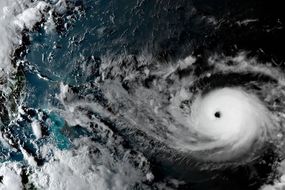 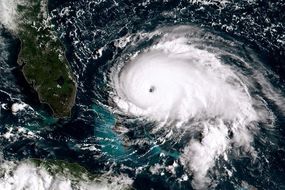 "They said evacuate, you have to evacuate."

Over two or three days, the slow-moving hurricane could dump as much as 4ft of rain, unleash devastating winds and whip up a dangerous storm surge, said private meteorologist Ryan Maue, seconding some of the most reliable computer models.

PREV #Mandy airs tonight on the BBC
NEXT 'I was turning to drink' One Show host Alex Scott opens up about trolling in ...