Speaking to students, Israeli Prime Minister Benjamin Netanyahu said it is clear today that most terrorism which Israel faces stems from Iran. Mr Netanyahu also said that those who try to destroy Israel also risk destruction themselves. 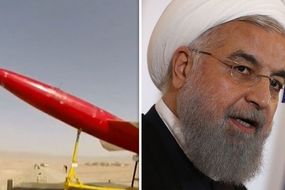 He said: “And this is the main point – you can negotiate with an enemy that has decided to stop being your enemy.

“They always say, ‘You make peace with your enemies.'

“Peace you make with enemies that decided to stop being an enemy.

“But enemies that continue to fight against you, who say openly that they want to destroy you – there is only one way to deal with them: If someone rises to kill you, rise up and kill him first, and prevent him from getting game-changing weapons.”

Smoke rising during reported shelling from Israel on fields near the border of Lebanon (Image: GETTY)

Israel currently has mounting tensions with Iran and its proxies in Lebanon, Syria and Gaza.

Mr Netanyahu said: “A new empire has arisen with the goal of defeating us.

“They are trying to entrench themselves in Iraq to turn it into not only a country through which it can transfer arms to Syria and Hezbollah, but also to turn it into a launching pad for rockets and infiltration against us.” 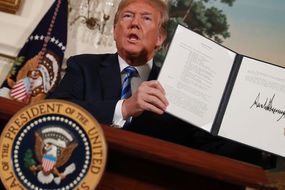 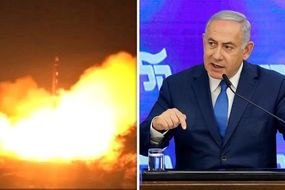 Will Iran strike back at Israel? US ally puts army on standby

Mr Netanyahu also said that Israel is currently fighting all these fronts.

Israel is reportedly determined to prevent