When Kate was dating Prince William, the Queen apparently had “grave concerns” she did not have an identity of her own. The monarch was also worried that she didn’t appear to have much of a work ethic and wanted to make sure she understood that she needed to work hard if she was going to marry into the Royal Family. In fact, Kate had been dubbed ‘Waity Kaitey’ because she seemed to just be waiting for William to propose to her. 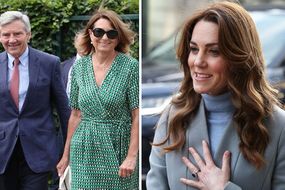 Royal expert Katie Nicholl wrote in her 2011 book ‘The Making of Romance’ that the Queen intervened two years before the engagement, because she wanted to make sure Kate got a job before William proposed.

Ms Nicholl wrote: “Privately [the Queen] had grave concerns and believed that Kate needed to have a job and an identity in her own right before an engagement was announced.”

She added: “The Queen is one of the hardest-working royals, despite her age, and that a future member of the Royal Family was without a full-time job was unacceptable to her.”

Kate was advised to take on some charity work, so she started working with Starlight, a charity for terminally ill children.

Kate and Meghan were given opposite advice when they joined the Royal Family (Image: GETTY)

Kate was in her late 20s when she finally got engaged to William (Image: GETTY)

She also worked briefly at fashion house Jigsaw before moving on to work with her family on their business Party Pieces.

In complete contrast to this, Meghan had been a busy actress, as well as a vocal activist for many years before she even met Prince Harry.

She had spoken out on various causes, most notably the empowerment of women, and was even a UN women’s advocate.

The future Duchess was also known to speak about politics, branding Donald Trump “misogynistic” and “divisive” in 2016.

Meghan and Harry got engagement after a whirlwind romance less than two years long (Image: GETTY)