SIR TOM JONES is known for being quite the hit with the ladies, but this may have had an unfortunate effect on his wife, Linda.

Linda, affectionately known as Lady Linda, was the woman who stayed with Sir Tom for almost 50 years. She had a “short but fierce” battle with cancer and died on April 10, 2016. She spoke out about her feelings in the marriage to close friends, but remained silent for most of her life in terms of the press.

One of Linda’s friends, the wife of Sir Tom’s first manager Gordon Mills, believed there was a reason Linda struggled with her husband’s dalliances, and the reason stemmed from when the singer was first brought onto the entertainment scene.

Mills introduced Sir Tom to the world in 1965, naming him a 22-year-old single coal miner from Wales.

The truth, however, was very different, as Sir Tom was in fact 24-years-old, married with a seven-year-old son, Mark, and had never been down a mine in his life.

However, the truth had to come out, and Linda did one of her only ever interviews.

She said: “I feel alive when he comes though the door, whatever the time of day or night is.”

According to Mills’ wife Jo, Linda’s insecurities could have come from that early description of the “single” Sir Tom, which reportedly made her feel she was “not good enough” for her husband.

Mills said: “I think from the very beginning, Linda was made to feel as if she mustn’t exist in his life.

“It is sad because she is a lovely person, very warm, and if only she had got that confidence initially, she would have been very different, I am sure.” 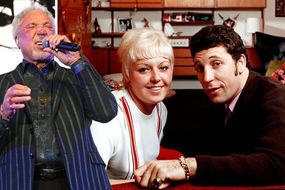