The Duke and Duchess of Cambridge are set to undertake a symbolic tour of the Emerald Isle next week - a huge event in the royal calendar which will clash with one of the Sussexes’ final engagements. The couple’s journey to Ireland will be the first time any member of the Royal Family has visited the Republic since Brexit. A source told The Sun how royal staff were having to deal with a “nightmare”.

Royal POLL: Will you call Prince Harry by his requested new title? 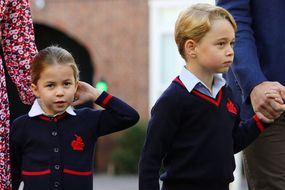 One of the Sussexes’ final engagements before they officially step down as senior royals on March 29 will take place on Thursday.

The pair will head to the Endeavour Fund Awards in London.

On the same day, William, 37, and Kate, 38, will be busy carrying out duties as they wrap up their overseas tour.

The father-of-three fears Harry and Meghan’s return will steal the spotlight away from exciting events in Dublin, Meath, Kildare and Galway.

The insider said: “While William fully respects Harry’s right to come back whenever he wants - indeed he is glad that he is returning, however briefly - he wishes that it wasn’t at the same time as his Irish trip because he knows what will happen is that the spotlight as far as papers and TV are concerned will be fully on Harry and Meghan.”

The source said the Cambridges are in no way jealous of media attention given to their in-laws - but are concerned their undertakings will be pushed down the priority list on news coverage.

“It’s not that he and Kate would be jealous of all that coverage - they’re simply not like that - but their tour of Ireland is an important one, and he would have hoped it would get due media prominence,” the source added.

Harry and Meghan will carry out six engagements in the space of 11 days.