The Duke and Duchess of Cambridge are now the proud parents of Prince George, Princess Charlotte and Prince Louis. William and Kate took their time to develop their strong relationship over a ten-year courtship that ended in their spectacular 2011 royal wedding. The pair tried their best to keep their blossoming romance under wraps in the early years, however, as Kate began to appear in royal circles she inevitably attracted attention from the press.

Royal wars: How Charles has battled with Labour peer over huge income 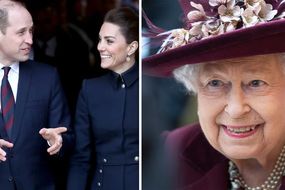 Although William himself tried to outfox the media and protect Kate by throwing reporters off the scent, the Palace made a crucial blunder when it came to indicating the Prince’s serious intentions about his long-term relationship.

In 2006 , Palace aides made statement – and their mistake hinged on just one small word.

Veteran royal reporter Robert Jobson takes a look at the statement in his 2006 book “William’s Princess”.

Mr Jobson writes: “In March 2006 my newspaper the Evening Standard ran a spread of pictures of Kate wearing a fur hat at Cheltenham races and pointing out that her fashion sense mirrored the controversial regal fondness for animal pelt.

The Duke and Duchess of Cambridge (Image: Getty)

“Seasoned royal watchers were less moved by her choice of hat that by the fact she was pictured in the same exclusive Members Enclosure as Prince Charles and his new wife Camilla, now Duchess of Cornwall.

“William was not with Kate on this occasion as he was continuing his rigorous training at Sandhurst military academy.

“Yet there was Kate, laughing and smiling and utterly at ease

Samsung will reportedly make the next Galaxy Fold more affordable

Another major fintech exit as SoFi acquires banking and payments platform Galileo for $1.2B