OUR GIRL is everyone's favourite military drama series which first aired on BBC One in March 2013. Star of the show Michelle Keegan, who joined the show for the second series, has announced the new series will be her last.

Our Girl on BBC One initially cast Eastenders star Lacey Turner as the main character Molly Dawes. Turner left the role after the first series and was replaced by Coronation Street star Michelle Keegan as the new lead, Lance Corporal Georgie Lane. Here is everything you need to know about Keegan in the new series.

In January last year, it was confirmed by the BBC Keegan would return for a six-part series four.

The video is a short teaser for the new series which shows Georgie’s grandmother burning her head on a hair straightener.

The clip focuses on Georgie’s wedding preparations and fans are already excited to see her back on screens. 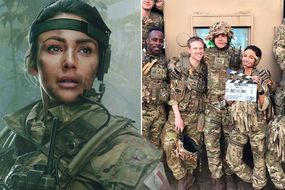 Keegan revealed series four will be her last on the show as Georgie Lane but it is not known whether the show will carry on for a series five without her.

She made the announcement back in January but with the new teaser dropping, fans were curious to know more about her decision.

The six-part series four will take place a year on from 2 Section’s last tour in Bangladesh.

At the time of the series four announcement Keegan said: “Being in Our Girl has been one of the highlights of my career so far.

“I feel very lucky to be part of the show and I’m really excited that it’s coming back. The audience response has been so positive and I think Georgie is a character who resonates with viewers.

“I absolutely love playing the role. Be prepared for another incredible series - Georgie’s still got unfinished business.”

Our Girl: Keegan's best moments in the show (Image: BBC)