DANCING ON ICE has reached the semi-final stage and fans watched from the edge of their seats as the four remaining couples performed. Here is everything you need to know about who left the show on ITV tonight.

The ITV talent competition Dancing on Ice sent another pair home from the rink tonight. There are only three couples left in the contest and the competition could not be tougher. Here's everything you need to know about who lost the skate-off tonight (Sunday, March 1).

Ben Hanlin and his professional partner Carlotta Edwards were booted out of the semi-final tonight after a challenging skate-off in front of the judges.

Ben was the eighth celebrity to leave the show, which leaves just three couples to go through to the grand final next weekend.

Speaking to hosts Holly Willoughby and Phillip Schofield after the skate-off Ben said he was so grateful to have come so far in the show.

The couple were up against Libby and Mark in the skate-off this time around and it was a tough competition.

Ben and Carlotta skated first with Libby and Mark following close behind. Libby had a surprise trick which wowed viewers at the end of her performance. 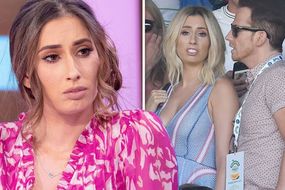 Judging the performances were Christopher Dean, Jayne Torvill, Ashley Banjo and John Barrowman, who all gave compelling arguments for their choices.

The couples were asked to dance two routines this time around, which meant double the challenge for the contestants.

The celebrities were also asked to take part in a solo skate for what is called the judges' challenge.

Chris chose to save Libby and Mark, which meant Ben and

Strictly's Anton du Beke vows he will return to the show amid coronavirus ...