THE UK kicks off post-Brexit trade talks with the European Union today with a rallying cry from lead negotiator David Frost ringing in their ears, but there are already huge fears talks could collapse within weeks.

Boris Johnson’s chief negotiator David Frost arrived in Brussels on Monday and gave a rousing pep talk to teams of more than 100 British officials, who begin crunch talks with their EU counterparts today in what promises to be a bruising nine-month battle. Mr Frost told his teams that while talks should be friendly, they should also be robust in protecting British sovereignty from EU demands and regulatory alignment. Formal negotiations will open today with 11 teams of officials on both sides attempting to hammer out issues, most notably the huge contested one of “level playing field” alignment with European laws, fishing access, enforcement and dispute resolution. 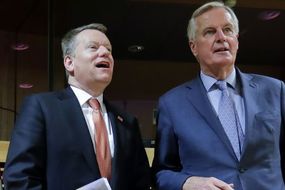 Brexit trade talks begin without handshake amid fears of coronavirus

Britain’s head negotiator tweeted that talks had opened on a constructive basis, while the EU’s chief Brexit negotiator Michel Barnier insisted Brussels would “approach these negotiations in a constructive spirit” in order “to agree an ambitious and fair partnership”.

But the huge red lines on both sides mean talks could collapse by as early as next month, Bloomberg has reported, citing three people familiar with the matter.

Boris Johnson is pushing for a comprehensive Canada-style deal but Mr Barnier has ruled this out, claiming it would not be suitable for Britain due to its close proximity and links to the continent.

The EU is demanding the UK stick to its standards even after its single market, which has been furiously rejected by the Prime Minister, while European officials are also concerned he could backtrack on his commitments to avoiding a hard border in Ireland.

Brexit latest: The UK and EU begin trade talks, but they could already be on the verge of collapsing (Image: GETTY)

Mr Johnson wants a full trade agreement (FTA) signed with the EU before the end of the transition period on December 31, but has threatened to walk away from talks in June if there is no deal in sight at that point.

But a trio of people familiar with the negotiations have warned the crunch point in the process could come before June, particularly if neither side is willing to loosen their grip on their red lines in the first negotiating rounds.

The EU is hosting the opening set of talks this week, with a three-day session scheduled for London from March 18, before negotiators return to Brussels on April 6.

But by that point, people

PREV Holly Willoughby rages as she insists government ‘haven’t delivered’ on ...
NEXT 'Public health risk': How Tesla fought to keep its US plant open in a ... mogaznewsen