PRINCE HARRY has historically asked the public to call him just ‘Harry' and drop his title, according to royal expert Omid Scobie who explained why the public aren't used to seeing it.

Prince Harry, 35, who will step down as a senior member of the Royal Family on March 31, notably made clear he just wants to called Harry in his first royal engagement back in the UK. The Duke of Sussex as already arrived back in the UK to complete his final round of royal engagements, and Meghan Markle is believed to be returning soon. But Harry’s plans to ditch his royal title dates back years, according to ABC News royal contributor, Omid Scobie. 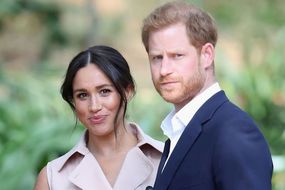 Meghan Markle pregnant: Duchess to have 'another baby' this year

Speaking on ABC News’s HeirPod, Mr Scobie said: “There was some talk that really dominated the headlines when Harry wanted to be introduced to the stage as Harry.

“No titles, no HRH. We’re not used to seeing that.”

He continued: “I think this is a significant moment for Harry.

“This shows that he is ready to move into this new chapter at full-force ready to leave behind the HRH’s and the pomp and the circumstance.

Prince Harry and Meghan Markle will step down as a senior member of the Royal Family on March 31 (Image: GETTY )

“The pageantry that may have gotten on his nerves in recent months or years.

“But I also think we have to sometimes remember not to overreact.

“I have met Harry a number of times,

PREV Should unwoke TV shows be wiped from the history books? mogaznewsen
NEXT 'Public health risk': How Tesla fought to keep its US plant open in a ... mogaznewsen