CHANCELLOR Rishi Sunak is a secret supporter of breaking up the UK because the Union doesn't make "financial sense" to him, according to shock claims by a Tory insider.

Chancellor Rishi Sunak, Boris Johnson’s new finance minister tasked with leading the UK’s economic strategy during the coronavirus pandemic, is said to have argued for “England to break away”. A Conservative insider said Mr Sunak, a rising star in the Tory party, “doesn’t have any love for the institution” and advocated for the “end of the UK”. 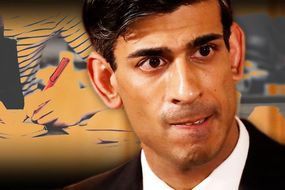 The source told the Financial Times: “I remember discussing the future of the Union with Rishi and he argued that England should break away.

“He was advocating the end of the UK because it doesn’t make financial sense to him.

“He doesn’t have any love for the institution and I suspect he looks at it as he looks at anything: what’s the profit?”

Rishi Sunak reportedly supports a breka up of the Union (Image: GETTY )

The claims of Mr Sunak’s approach are in direct challenge to those of his leader, Mr Johnson, who has made it clear he will do everything possible to keep the “precious” Union together.

But Mr Sunak’s allies dismissed the conversation and argued he is a staunch supporter of the Union “and the shared values it represents”.

Five years ago Mr Sunak wasn’t even a member of parliament, now he is running the world’s fifth-largest economy as it battles against the national health crisis that is the coronavirus pandemic.

The 39-year-old former Goldman Sachs banker was appointed in dramatic fashion when incumbent Sajid Javid unexpectedly quit - in a row over advisers - during what Downing Street described as a routine ministerial reshuffle.

Since Britain voted to leave the EU, the future of the UK has been

RT @expressceleb: Jeremy Clarkson announces new move as he reunites with The ...

#LooseWomen star speaks out on taking part in #CelebrityGogglebox as Channel 4 ...