Liz (played by Beverly Callard) has been taking a back seat on Coronation Street of late, milling in the background as the younger members of her family take centre stage. However, the ITV soap icon is going to get her time in the spotlight as the catalyst behind her exit from the cobbles unfolds in the coming weeks and months. With viewers speculating how she will bid farewell to Weatherfield, spoilers from next week’s episodes could have given the game away with the arrival of a mysterious newcomer, but will she make a deal with the devil and find herself murdered? 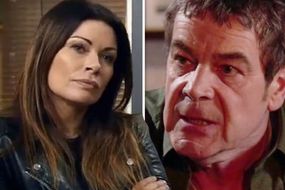 It was announced last year actress Beverly Callard, 63, had decided to leave her iconic role behind her for good after three decades.

During her time, her alter-ego has manned the Rovers Return, had countless tiffs with her son Steve McDonald (Simon Gregson) and ex-husband Jim McDonald (Charles Lawson), as well as having a steamy affair with current pub owner, Johnny Connor (Richard Hawley).

After his wife Jenny McDonald (Sally Ann Matthews) ran Liz down in a horrific hit-and-run, leaving her for dead, the former barmaid hasn’t had much to do with him since.

However, next week she will be thrust back into the landlord’s next big storyline as a mystery man from his past arrives on the cobbles, but it seems he catches Liz’s eye. Is she in danger? 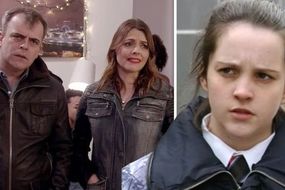 As previously reported, Johnny’s world will be turned upside down in upcoming scenes when an unwelcome visitor would turn up at the Rovers Return.

The newcomer will certainly shake things up as the landlord will tell his wife they’re going on an impromptu holiday to France to get away from the shady figure.

Next week will be the first time viewers get to clasp their eyes on this mystery character as Scott Emberton (Tom Roberts) makes his mark in Weatherfield.

He will turn up at the pub hoping to secure

Hate him or hate him, Lance Armstrong's contradictions make for a compelling ...

GDP figures are due out today, but what does it all mean for you?