Ronnie Archer-Morgan was on hand to carry out the valuation of a gold snake ring on Antiques Roadshow when the show visited the Stormont Parliament Buildings. A guest presented the piece of unusual jewellery to him and revealed an incredible backstory that led to the BBC expert changing his mind about the worth of the item. 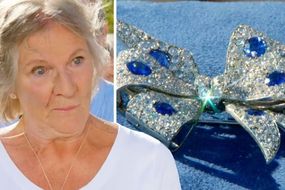 Ronnie began: “We’ve got a double snake gold ring here and a picture of a man.”

“Yes, he’s my great great grandfather, a gentleman named Jack Sores. He was Portuguese consulate in Alexandria,” the guest revealed.

“But he was also a Jewish banker and that’s how he came by the ring.

“The story goes he was given it by Lord Carnarvon as a token of his appreciation for his help with organising funds for the famous excavations in the Valley of the Kings.”

Antiques Roadshow: The guest brought along a Roman gold snake ring to be valued (Image: BBC) 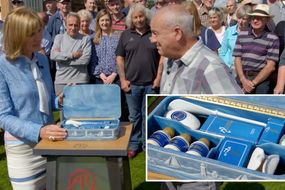 “Tutankhamun, the most famous archaeological discovery ever and so what’s the ring supposed to be?” Ronnie added.

The owner explained: “I was told it might be Roman and that’s about all I know, and as it’s snakes I assumed it was Egyptian.”

“It’s not Egyptian and it may be Roman. It’s in a Roman-style, it’s gold, it's quite fine gold,” Ronnie continued.

“I’ve looked at it and it’s

PREV Meghan Markle hurt she 'wasn't number one' as Sussexes had to be told 'Queen ...
NEXT 'I was turning to drink' One Show host Alex Scott opens up about trolling in ...