MAHLON REYES - who was best known for starring in Deadliest Catch - has died at the age of 38 after suffering a heart attack. The deckhand's family have confirmed the news while sharing their "shock" over his tragic death.

Deadliest Catch star Mahlon Reyes has died at the age of 38. The television personality was a deckhand on one of the crab fishing boats on the show.

The sad news has been confirmed by Mahlon’s wife, who said his loved ones are “completely shocked” that he suffered a “massive heart attack”, as he had no existing health conditions his family knew of.

His other half confirmed he died in his hometown of Whitefish, Montana after his heart attack last Saturday morning.

Mahlon initially survived the heart attack after being rushed to hospital.

However, he never regained consciousness and his family made the decision to take him off life support.

Mahlon Reyes was a deckhand on one of the crab fishing boats on the show (Image: FACEBOOK) 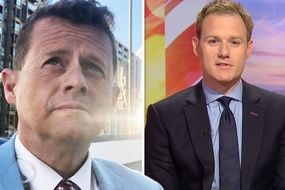 Mike Bushell: BBC star in awkward snub as he calls for Dan Walker

He was surrounded by loved ones at the time of his death.

Mahlon’s wife also informed TMZ that his Deadliest Catch crew and co-stars will scatter some of his ashes at sea.

The US media outlet reports that Mahlon had been recovering from a torn Achilles tendon, which he sustained while crabbing on the boat.

He had been working hard to

PREV Ozzy Osbourne addresses ‘bad news’ amid Parkinson’s battle as he opens up ...
NEXT 'I was turning to drink' One Show host Alex Scott opens up about trolling in ...