Several hundred demonstrators marched through Brixton to demand reparations from the UK Government for the actions of the British Empire. The protest was supported by groups including the Afrikan Emancipation Day reparations march committee and Stop The Maangamizi: We Charge Genocide. 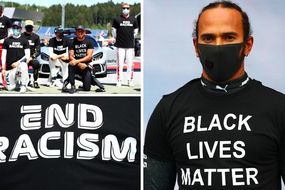 The procession was largely peaceful, though there were some scuffles with police after protestors blocked a road leading to three arrests.

Controversially the protestors included a couple of dozen men dressed all in black, complete with what appeared to be stab proof vests, who marched as a disciplined unit.

The group wore patches and carried flags identifying them as coming from the FF Force.

Several of the men wore balaclavas whilst others had face masks to protect from COVID-19.

A group of protesters dressed all in black at the Brixton protest (Image: YouTube_World Protest News)

Mr Farage, the Brexit Party leader, condemned their presence at the protest on Twitter.

“A paramilitary-style force marching in the streets.

“This is what the BLM movement wanted from the start and it will divide our society like never before.”

Protestors chanted “No Justice, No Peace” as they completed their march whilst a group also shouted “F**k the police”.

However, Mr Farage’s comments were condemned by Jonathan Bartley, co-leader of the Green Party.

Replying to the leading Brexiteer he tweeted: “You are

PREV #BREAKING: A dozen new cases of COVID-19 have been diagnosed in NSW overnight.
NEXT 'I was turning to drink' One Show host Alex Scott opens up about trolling in ...