TWO AMERICAN astronauts left the International Space Station and are preparing to make history as they return to Earth later today.

They are being transported by a Dragon Endeavour capsule produced by Elon Musk’s SpaceX company. If their mission is successful it will mean the US has a fully operational system for getting its astronauts into orbit, then back to Earth, for the first time since 2011. 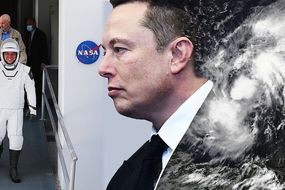 That year saw the final flight from the Space Shuttle programme which went into operation in 1981.

US astronauts Bob Behnken and Doug Hurley are onboard the Endeavour capsule making its way back to Earth.

The reusable Endeavour capsule will be collected by a recovery vessel off the coast of western Florida.

US astronauts Bob Behnken and Doug Hurley are due to return to earth (Image: GETTY)

The precise location has been chosen to avoid Hurricane Isaias which looks set to hit eastern parts of the state.

This will be the first crewed US capsule to make an ocean landing for 45 years.

After retiring the Space Shuttle programme NASA decided to work with commercial partners rather than build another transportation system of its own.

The first partner to the company is SpaceX founded by tech tycoon Elon Musk.

READ MORE: NASA launch to Mars: Where is Perseverance now?

The US astronauts left Earth back in May (Image: GETTY)

As well as its capsule

PREV #BREAKING: Woolies are imposing buying restrictions once again on various ...
NEXT 'I was turning to drink' One Show host Alex Scott opens up about trolling in ...