INTO THE NIGHT season 2 could be on the cards following the success of the first series. Will there be another series of Into the Night?

Into the Night is a dystopian thriller series on Netflix and fans are keen to find out whether the survivors find a cure. The Belgian sci-fi series is based on the novel The Old Axolotl by Jacek Dukaj and it is set during an apocalyptic time. Here is everything we know so far about Into the Night season 2.

Netflix aired its first-ever Belgian series earlier in May and the debut series went down a hit with fans across the world.

The series follows a group of passengers who are hijacked while on board a plane from Brussels and the group hopes to survive a catastrophic solar event.

Living organisms are killed during daylight hours only as a result of this phenomenon, and the passengers must fly west to survive.

In September 2019 it was announced a six-part season was to air, and an official trailer for the new series dropped in April 2020.

Into the Night: The series made its debut on Netflix (Image: Netflix)

Into the Night: Terenzio warns the others of the danger (Image: Netflix) 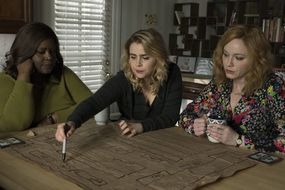 Good Girls season 3 release date: When will Good Girls be on Netflix?
Will there be another series of Into the Night?

Netflix has now given Into the Night the go-ahead for a second season, and it has already released a teaser clip.

Jason George, creator of the series, said: "We’ve been thrilled by the global response to Into the Night, and I’m excited to share that we’ll be doing a second season.”

The first season only lightly touches on the novel it is based on, meaning there is plenty more material to use in a second series.

The debut series made it into the Netflix Top 10, which is a good sign for fans.

No official release date has been given for season two yet.

Into the Night: The passengers face a solar catastrophe (Image: Netflix)

Into the Night: The plane was heading west from Brussels (Image: Netflix)

A new series is likely to cover the new way survivors have found in order to walk in the sunlight without being affected.

PREV “I want an apology from Dan Andrews. I thought he cared about keeping people ...
NEXT Careful drama rises to the occasion mogaznewsen