OUTER BANKS season 2 is on the cards as fans fell in love with the cast of the first series. When will season 2 of Outer Banks be out?

Outer Banks on Netflix went down well with fans and season two is looking likely after the co-creator dropped a hint. At the end of the first season John B (Chase Stokes) and Sarah Cameron (Madelyn Cline) were rescued by a crew during a storm. Co-creator Josh Pate revealed he was working on a script for a potential season two and an official release date has now been revealed.

He told Entertainment Weekly he had been discussing a new season with Netflix before the first season was even released on the streaming platform.

Pate said: "Netflix had greenlit us to write some [season 2] scripts, so we’ve been working on that for a few months now.

"Ever since we started, we always viewed it as something that was probably like a four-season, maybe five-season show, but definitely four seasons."

This will be music to the ears of avid fans who fell in love with John B's character, and viewers were left feeling emotional having seen the group of friends grow even stronger.

Fans have been calling for a new series on Twitter, with one fan saying: "Outer Banks needs to hurry up with a season two."

READ MORE: Outer Banks: Who is Pope actor Jonathan Daviss? Where is he now?

Outer Banks: The friends hide from the police (Image: Netflix) 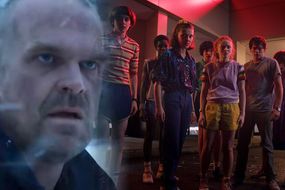 Stranger Things season 4 script leaked: Has there been a script leak?
When is season 2 of Outer Banks out?

Netflix has now officially renewed Outer Banks for season two, much to the delight of fans.

Some of the cast members had already talked of filming for a potential second season, however due to the coronavirus outbreak production has been put on hold across the globe.

Pate told Entertainment Weekly: "We’ve sort of long-arced it out pretty far. I’m just hoping that we get a chance to actually tell those stories.

"We feel like we really just played the opening round of that story."

Fans will most likely have to wait until the end of 2021 for a new season.

Outer Banks: Pope with JJ in the background (Image: Netflix)

Who will be in the cast of season 2 of Outer Banks?

The main cast members have attracted hundreds of new fans on their social media accounts since the new series aired.

The series follows a group of teenage friends who call