TEENAGE BOUNTY HUNTERS is a new comedy-drama series about twins with a secret hobby. How many episodes are there?

Teenage Bounty Hunters is about to land on Netflix and the series follows teenage twins Sterling (played by Maddie Phillips) and Blair (Anjelica Bette Fellini). The girls have to navigate teenage life while taking on the role of young bounty hunters in Atlanta. Fans are wondering how many episodes are in Teenage Bounty Hunters, and Express.co.uk has everything you need to know.

{%=o.title%}
How many episodes are there in Teenage Bounty Hunters?

Teenage Bounty Hunters is a new comedy-drama series which was created by Kathleen Jordan.

The series is due to make its debut on Netflix on Thursday, August 14, and it is a Netflix Original.

There will be a total of 10 episodes in the series, and they should all land on Netflix at the same time.

Fans in the US will get to watch the series from midnight, whereas fans in the UK will have to wait until 8am.

The episodes have all been given their own titles according to the Writers Guild of America West.

READ MORE: Teenage Bounty Hunters cast: Who is in the cast?

Teenage Bounty Hunters: There will be 10 episodes (Image: Netflix) 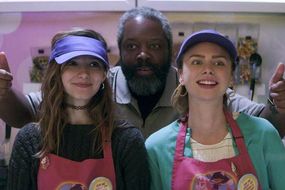 Teenage Bounty Hunters Netflix release date: When will series be out?

Episodes for the first season include the following:

Cleave or Whatever written by Megan King Kelly

From Basic to Telenovela written by Tara Herrmann

Our Ham is Good written by Jenji Kohan

This Must Be How Dumb Kids Feel written by Shane Kosakowski

What Had Happened Was written by Aziza Barnes

Filming took place in Atlanta, Georgia from July to October