Away on Netflix review

AWAY is an upcoming series which follows a group of NASA astronauts who hope to land on Mars. But is the series worth watching?

Away is a new series coming to Netflix on September 4 starring Oscar winner Hilary Swank as astronaut Emma Green. Emma and her team have been given the once-in-a-lifetime opportunity to attempt the first-ever Mars landing. Express.co.uk has everything you need to know about the series, and whether it is worth a watch.

The space series Away begins with Swank walking on the Moon, admiring a breathtaking view most viewers will only ever dream of seeing.

While many shows with a similar theme fall under the sci-fi genre, and they can seem a little far-fetched, Away immediately leaves viewers with a familiar feeling.

Although set in space for the most part, the series is close to home for many as it uncovers what Emma had to sacrifice to get to where she is today.

The series opens with Emma and her crew standing proudly on the Moon, waiting for the go-ahead to start their trip to Mars, so far away from their families.

As each member of Emma's team is introduced, it becomes clear they have had to make heartbreaking decisions to earn a place on the mission.

The feeling of having to choose between family and work is all too familiar for many, and every episode tugs on the heartstrings.

Yet the intense storylines do not detract from the outstanding set, which leaves viewers feeling as if they are a part of the journey every step of the way.

Even with the actors being on wires to achieve a sense of zero-gravity, the experience feels more like Virtual reality.

READ MORE: Away Netflix release date: When is Hilary Swank series Away out? 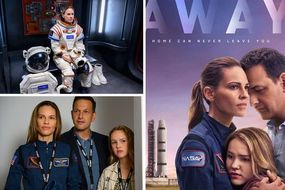 Away Netflix release date, cast, trailer, plot: When is Away out?

Emma is the perfect leading light for the series as she is relatable as a working mother.

She is wholly dedicated to both her job and her family, including husband Matt Logan (Josh Charles) and teenage daughter Lex (Talitha Bateman).

Every decision she makes is for the good of her family, yet she still feels the undeniable guilt of leaving them behind.

Emma is not perfect - in both her work and home life she makes mistakes and she gets things wrong - but it only makes her human and she is admired for it.