A NASA space probe has made a remarkable re-entry to Earth, burning up as it hurtled to its death, a new video has revealed.

The vintage Orbiting Geophysical Observatory-1 (OGO) NASA satellite has been captured during re-entry through the planet’s atmosphere. The extraordinary event was captured over Tahiti and the Cook Islands.

Amateur video was captured and distributed by a Facebook community of aeroplane spotters.

The satellite re-entered at 4.44pm EDT (9.44pm BST) and thankfully incinerated safely in the atmosphere.

The satellite as a result zero posed no threat to humans, NASA spokesperson Josh Handal confirmed.

The spacecraft hit the atmosphere about 25 minutes earlier than NASA had forecast.

READ MORE: Alien technology: 'Oumuamua could have been sent by aliens

NASA news: A space probe has made a striking re-entry to Earth (Image: NASA) 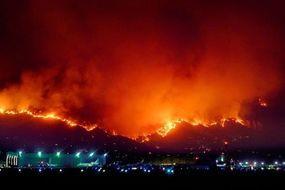 This meant in a re-entry location was far further east of the space agency's estimates.

AS well as tracking the satellite from afar, NASA received reports of the event from people on the Tahiti.

Launched in 1964, the Orbiting Geophysical Observatories program refers to six satellites launched by US space agency NASA to study the Earth's magnetosphere.

This is the area around Earth affected by our planet’s mysterious magnetic field.

PREV Denise Welch furiously lashes out at Matt Hancock as he addresses rule of six ...
NEXT Australians' support for US plunges to record lows under Trump mogaznewsen