JANE BIRKIN, model and actress who rose to fame in the 1960s, has spoken candidly about her insecurities, admitting to sleeping with an eyeliner under her pillow in a bid to hide her "piggy eyes" from her husband.

Jane Birkin, who married her first husband John Barry at the age of 18, admitted she never felt attractive and hid behind a "mask of make up for years". The 73-year-old 60s icon has now spoken about her earlier years in the entertainment industry.

Jane revealed that as a teenager she felt "dowdy" and never "beautiful".

The singer discussed her first marriage to composer John and her attempt to hide her natural Beauty.

"By the time I got married to composer John Barry at age 18 I was just a painted face, hiding behind a mask of make-up," Jane said.

"I suppose I fitted into the 1960s 'English pretty' look at the time." 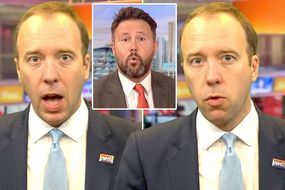 She continued: "I wasn't as beautiful as Jean Shrimpton, who was my icon, but the fashion of the time helped, with very short miniskirts and blonde haircuts with a fringe.

"Throughout my marriage to John, I used to sleep with an eye pencil under my pillow."

The model added: "If he woke up in the night, I could put it on, so he wouldn't think I had tiny, piggy eyes.

"There was such insecurity, it was quite crazy - I spent most of my time trying to look like a fashion tableau."

Jane made the candid admission in Elle