COBRAI KAI is now available to watch on Netflix. So how many series is there going to be of the action fiction?

Cobra Kai tells the story of Johnny Lawrence (played by William Zabka) and his childhood rival Daniel LaRusso (Ralph Macchio) 34 years after the events of classic cult film Karate Kid. The Netflix series shows what the two have been up to since the All Valley Karate Tournament and how it affected their lives. While the two didn't stay in touch, their feud is soon reignited.

Cobra Kai was originally a series on YouTube Premium where it first started airing on the service in 2018.

The show was then renewed for a second season which came out last year.

Over time, Cobra Kai has gained itself a loyal following and attracted attention from those at fellow popular streaming service Netflix.

The rights were acquired by Netflix and Cobra Kai is now part of its massive library of content.

Cobra Kai: How many seasons of Cobra Kai will there be? (Image: Netflix) 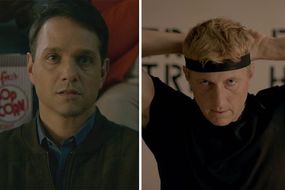 Both seasons of Cobra Kai are now ready to watch on Netflix.

All 20 episodes were dropped onto the platform on Friday, August 28.

Despite it only being just a few days since its release, Cobra Kai is already the number one trending show on Netflix in the UK as of writing this article.

So naturally, fans are already questioning how long the series will be on for.

Cobra Kai: A third season will be released in 2021. (Image: Netflix)