PRINCE HARRY seems to signal he is very much at home in the USA by 'adopting traces of an American accent' in a new video to promote Netflix documentary Rising Phoenix, a body language expert has claimed.

Prince Harry, 35, and Meghan Markle, 39, have been based in the USA since March and the prince is already showing signs of 'US immersion', according to a body language expert. Harry recently appeared in a Zoom call alongside Paralympians to promote Netflix documentary Rising Phoenix which tells the story of the Paralympic Games.

Having set up the Invictus Games for injured veterans, the Paralympics is an initiative close to Harry's heart and he features in the documentary alongside athletes.

Some of the athletes in the documentary including the US's Tatyana McFadden and Matt Stutzman, Italy’s Bebe Vio, France’s Jean-Baptiste Alaize and South Africa’s Ntando Mahlangu all joined Harry on his latest Zoom call.

During the discussion about Rising Pheonix, Harry praised the athletes and lauded the importance of the documentary.

Speaking from his Montecito mansion, Harry said: "With Covid and everything else that is happening at the moment, your stories and the strength that you guys show, is incredible and that needs to be seen more.

Prince Harry: Harry spoke to some of the athletes who feature in Rising Phoenix (Image: HTYT stories/Twitter) 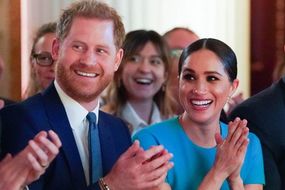 Meghan Markle and Harry not first royals to have TV career - who was?

He added: "It needs to be spoken about more, to try and get rid of the stereotyping to get rid of those preconceptions."

The body language analyst told Express.co.uk: "Immersing himself in a cause he loves, Harry also shows signs of his immersion in a US lifestyle here, adopting the traces of an American accent when he pronounces ‘matter’ as ‘madder’ before showing us some signature moves that he appears to have mirrored from Meghan, like the hand on the chest and upward glance while searching for words."

According to Judi, Harry's gestures hint at his desire to "get it all right" when he speaks.

Prince Harry: A body language expert has claimed the Duke has an American lilt in the new clip (Image: HTYT stories/Twitter)

The Prince's body language also suggests he is taking an "authoritative" stance.