POWER BOOK 2 is hitting screens very soon with viewers excited about the new series. But where is Power Book II: Ghost filmed and where's it set?

Starz series Power Book II: Ghost will be coming to televisions this weekend on September 6 as the highly-anticipated spin-off to the hit drama debut. The show comes several months after the Power series finale which saw the final chapter of drug dealer James “Ghost” St Patrick’s (played by Omari Hardwick) life play out. Express.co.uk looks at the filming locations and settings for Power Book II: Ghost.

Powe Book II: Ghost will be taking place straight after the events of the series finale in which Ghost was murdered by his son Tariq St Patrick (Michael Rainey Jr).

Ghost will be set in Power’s home of New York with various locations and settings used from all over the city as the backdrop to the drama.

The show will pick up with Tasha St Patrick (Naturi Naughton) now in jail and taking the fall for Tariq, so he could attend college to get his inheritance money.

Speaking about the show, actress Naughton exclusively told Express.co.uk: “It's definitely a continuation in some ways, but it's also a completely new vibe, a new evolution because we have to Tariq St Patrick who is, you know, becoming a lot more like ghost than he probably realizes. 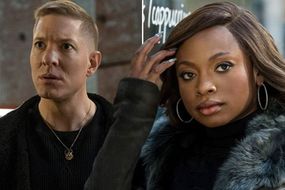 “And we also show the younger generation. There’s a lot more characters in this show where they're in college.

“So, there's a whole world of how the drug world can exist in a university.

“So, I think that's going to be different touches in prison, the season, very different from where she used to be with Tom Ford and Alexander McQueen, and her Louis bags. We don't have that anymore.

“Her wardrobe is literally an orange jumpsuit. Which sucks so, and I think this season, you'll get to see how those worlds exist and in a different way than that Power because the characters are putting the whole, entirely new circumstances.”

PREV Everything you need to know about the next season of ...
NEXT RT @expressceleb: Phillip Schofield fights tears speaking on ‘dark and ...