AWAY has just landed on Netflix and the drama series follows NASA astronaut Emma Green as she takes a crew to Mars. What happened at the end of Away?

Away is a new series which landed on Netflix on September 4, 2020, and it stars Hilary Swank as Emma Green. The emotional series saw Emma and her crew take off on a three-year mission to Mars, leaving behind their families. Express.co.uk has everything you need to know about what happened at the end of Away.

{%=o.title%}
What happened at the end of Away? WARNING: This article contains major spoilers from Away on Netflix

In the final episode of Away titled Home fans were keen to find out whether Emma and her crew made it to Mars safely.

The start of the episode saw Emma having a nightmare about the crew being blown up on their descent to Mars, and she tried to hide her scepticism.

Previously it had been decided the crew would bypass Mars and head straight back home as they were running out of water and had seemingly lost their supplies, which they believed had not made it to Mars.

However, Lu Wang (played by Vivian Wu) came up with a solution by using old equipment to listen to shock waves which indicated the supplies entered the atmosphere and landed on Mars.

The crew started to plan out their strategic landing, and Ram (Ray Panthaki) prepped the crew for the final leg of the journey.

Meanwhile back on Earth, Emma's daughter Lex (Talitha Bateman) continued to struggle with keeping the secret of her new boyfriend Isaac (Adam Irigoyen) from her father Matt Logan (Josh Charles).

READ MORE: Away on Netflix review: Hilary Swank series is out of this world

Away ending: Emma Green and her crew landed on Mars (Image: Netflix) 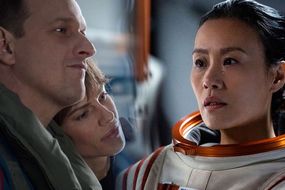 Away Netflix cast: Who is in the cast of Away on Netflix?

Following a heated chat with their family friend Melissa Ramirez (Monique Curnen), Lex decided she had to open up to her family about her relationship.

She also convinced Matt to take her to the hospital to be tested for the genetic health condition Matt suffers from, and her family was relieved when she was given the all-clear.

A spanner was thrown into the works when Melissa indicated she had feelings for Matt, and fans were left wondering whether they would become an item while Emma was away.

In terms of relationships amongst the crew, there was still tension between Emma and Ram after he confessed his love for her.