A MAJORITY of the British public are either "not interested at all" or "not very interested" in watching Netflix shows produced by the Duke and Duchess of Sussex.

On Wednesday Netflix announced a deal that will see Meghan and Harry produce documentaries, films and children’s programmes for the streaming giant. This follows a similar deal the company made in 2018 with Barack and Michelle Obama. 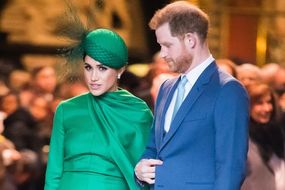 Whilst the exact figure has not been released the deal could earn Meghan and Harry up to £76million according to The Sun.

However the paper claims most Britons have little interest in watching their new programmes.

A YouGov poll found 64 percent of the public were “not interested at all” in viewing their shows.

Another 20 percent were “not very interested” in doing so.

A survey found most Britons are not interested in Harry and Meghan's Netflix shows (Image: GETTY)

Netflix announced a deal with the Duke and Duchess on Wednesday (Image: GETTY)

On the other hand just three percent said they were “very interested” with another nine percent “fairly interested”.

The balance was made up of people who said they didn’t know whether they had any interest in watching the couple’s shows.

Netflix has over 192million subscribers across the planet making it the largest streaming platform in the world.

Ted Sarandos, chief content officer at Netflix, spoke about how pleased the company is to have Meghan and Harry onboard on Wednesday.

He commented: “Harry and Meghan have inspired millions of people all around the world with their authenticity, optimism and leadership.