POLICE clashed with protesters who blocked a dual carriageway in Dover in demonstrations calling on Boris Johnson's Government to stop the flow of illegal boats into the coastal town.

The heated scenes came on the back of an eventful week which saw 416 migrants descend on the port on Wednesday – significantly breaking the previous record for a single day. Officers arrested 10 protesters as traffic on the A20 was brought to a standstill,

At least 5,600 migrants have now made it to British shores by boat since the beginning of the year.

The Home Office, which has come under fire for its attacks on "activist lawyers", has insisted that it will make the sea route "unviable".

Following days of bad weather, a flurry of migrant boats managed to make the perilous crossing in the English Channel on Wednesday.

Large numbers were seen being brought into Dover, packed aboard Border Force patrol vessels and sitting on the front of lifeboats.

Police arrested 10 people at protests in Dover over a surge in illegal immigrants (Image: GETTY)

Police face off with protesters in Dover (Image: GETTY)

He claimed they were not demonstrating against people moving to the UK, but against the Government’s failure to tackle the rising problem of illegal immigration.

“The protestors at Dover yesterday were NOT ‘anti-migrant’.

Protesters blocked the A20 into Dover (Image: GETTY) 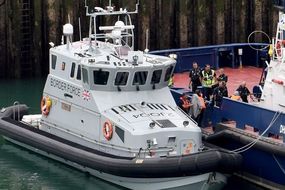 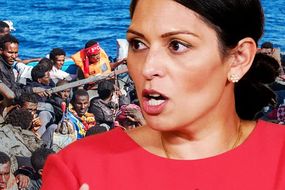 Boy's body washes up in Calais after trying to cross Channel

“They were protesting about this government’s inability to control ILLEGAL immigration.

“Why are the media insistent on painting people who want to uphold the law as extremists?”