UFO HUNTERS have excitedly shared extraordinary images of the recovery of an apparent alien craft close to Area 51.

A UFO has supposedly been spotted being loaded onto a lorry, according to claims made by an alien conspiracy theorist. The amateur smartphone videos purport to show an odd anomaly being loaded onto the back of a large goods vehicle at an undisclosed location in the US.

The minute-long montage shows a large disk-shaped anomaly strapped to the back of a lorry.

However, due to the grainy nature of the video footage, it is difficult to conclusively confirm what the orange object is.

Waring said: "Here is an interesting video of a trailer and truck having a bit of a problem with a UFO sliding a bit too far and getting off balance."

UFO sighting: A UFO has supposedly been spotted being loaded onto a lorry (Image: UFO Sightings Daily) 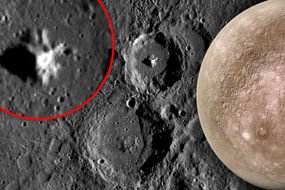 Waring adds the eyewtness was allegely 'blown away' by what they saw.

He then proceeds to suggest the object is extraterrestrial in origin.

Waring writes: “Now, UFOs have been transported like this before.

“Why? Because lack of military trucks and police vehicles causes less alarm and draws less attention.

“This is especially if they only have to take the craft short distances.

UFO sighting: The minute-long montage shows a large disk-shaped anomaly strapped to the back of a lorry (Image: UFO Sightings Daily)

“Why not fly it you ask? If it is a new disk given to the US military from aliens in trade for items,