PRINCE HARRY and Meghan Markle's recent behaviour means a reconciliation with the rest of the Royal Family is becoming increasingly "unlikely" as the Duke is "so far gone", according to a friend.

Harry and Meghan stunned royal fans by announcing they had signed a megawatt deal with Netflix to produce a range of informative and “hopeful” documentaries last week. This follows the publication of the sympathetic biography, ‘Finding Freedom’, which divided audiences after taking a stunning number of swipes at other senior royals. Royal correspondent Roya Nikkhah even described the newly-released account as a “score-settling” exercise which attacks the Royal Family, the institution of monarchy, royal aides and the media.

Although the Sussexes and the book’s authors deny collaborating, the level of detail in the biography has raised eyebrows as to how the writers gained such insight.

A “disappointed, bemused but still fond friend” spoke to royal correspondent Ms Nikkhah about the publication of 'Finding Freedom' and what it means for Harry’s relationship with his family.

Meghan Markle and Prince Harry at one of their final royal engagements (Image: Getty)

Royal commentators fear it's becoming increasingly unlikely for the Sussexes to return to the royal frontline (Image: Getty)

“They got most of what they asked for, they got the Queen’s public support and they’re out in California with Archie planning their new life the way they wanted it.

Writing in The Times back in July, Ms Nikkhah said that the couple’s “still-raw rage leaps off the pages”, and questions the royal tradition of “never complain, never explain”.

She explained: “Harry and Meghan’s exit deal is due to be reviewed next year, and the Queen and the Royal Family are said to have made it clear to the couple the door will always remain open to them.” 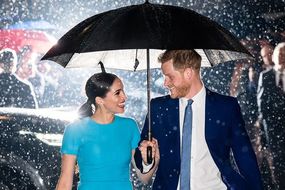