DES is a new drama series coming to ITV which is based on the life of the convicted murderer, Dennis Nilsen. Who were Nilsen's victims?

Des is due to air on ITV on September 14 and it stars David Tennant as the Scottish killer from the 80s, Dennis Nilsen. The three-part drama series documents the case from when Nilsen was caught out by police, right through to his imprisonment. The producers of the series spoke to Express.co.uk and other media about Nilsen's victims and how they are portrayed in the series.

Stephen Holmes was killed on December 30, 1978, and he had been walking home from a concert when he came across Nilsen.

The 14-year-old had accepted an offer to have a drink with him at home in Melrose Avenue.

He was strangled and then drowned in a bucket of water, and his body was kept at the home for seven months.

Kim Varvell, executive producer, said some of the victims' families were approached ahead of filming.

She said: "It was a very delicate balance, we didn’t want to be intruding but we wanted to let them know and reach out to them.

"We did speak to some of the victims' families, it was about carefully managing and being as empathetic and open and trying to explain our editorial intention but understanding this is incredibly raw.

"We had a lot of interaction with the real police."

Kenneth Ockenden was killed on December 3, 1979, and he was a 23-year-old Canadian student.

He had been on a tour of Britain when he came across Nilsen in a pub and he was taken around London.

Nilsen invited him back to his flat for a meal and he had previously been reported as a missing person before it was uncovered that he had been strangled with a headphone cord.

The writer of Des, Luke Neal, said the crew knew from an early stage they did not want to depict the actual crimes in the series.

He said: "I think very early on we knew we didn’t want to show any of the crimes simply because, in our view, these poor men went home with Dennis Nilsen, the only thing they did was go home with someone whom they met in a pub.

"We wanted to show the human cost of Dennis and what comes after he is caught. We didn’t want to show any kind of thing that would give a salacious or gratuitous version of these events."

READ MORE: Des ITV release date: When is Des out on ITV?

Des on ITV: A body is discovered in the ITV series (Image: ITV) 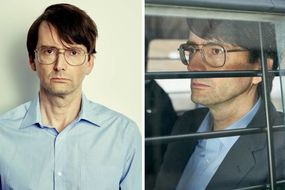 Martyn Duffey was murdered on May 17, 1980, and he was a 16-year-old who was found at a London railway station.