RUTH LANGSFORD has opened up about the disappointment she faced with her husband and This Morning co-host Eamonn Holmes, as she discussed the couple almost celebrating their first major milestone together.

Ruth Langsford, 60, tied the knot with husband Eamonn Holmes, 60, in 2010 and are parents to their son Jack, 18. The This Morning presenter has now revealed her birthday plans were somewhat ruined after the nation went into lockdown back in March.

Ruth revealed she had planned to celebrate her big day in Italy and added it would have been the couple's "first" holiday without their children.

Eamonn was previously married to Gabrielle Holmes and they have three children; Declan, 31, Rebecca, 29, and 27-year-old Niall.

The ITV favourite has now shared her regret on missing out on her birthday celebrations in a new interview but added that it wasn't the "end of the world".

It comes as the UK Government enforced a nationwide lockdown amid the coronavirus pandemic. 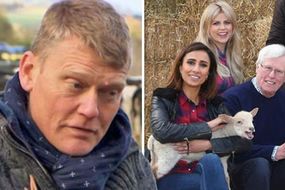 “I was supposed to go to Italy in the summer for my 60th," Ruth explained.

"My birthday was in March, but Eamonn has always said to me that when it’s a big birthday, you should celebrate all year."

Ruth continued: "We were planning to go to Pompeii for a bit of culture, then to the Riviera, but it’s not the end of the world; we’ll do it another time."

The Loose Women host admitted to counting her blessings and is grateful that her family are safe and well.

Ruth Langsford was due to travel to Italy on her 60th