ALL CREATURES GREAT AND SMALL is back with a new 2020 adaptation. Did the cast of the series work with real animals?

All Creatures Great and Small is back on Channel 5. The series tells the real-life story of Yorkshire vet Alf Wight, better known by his pen name James Herriot. The cast spoke exclusively to Express.co.uk and other media about whether or not they worked with real animals.

{%=o.title%}
Did the All Creatures Great And Small cast work with real animals?

All Creatures Great and Small is a welcome addition to the TV schedule as it brings laughs and smiles during a turbulent time.

The series features plenty of farm animals as it follows the story of a passionate vet who lands a job as a veterinary assistant.

Moving from Glasgow to Yorkshire, he has no idea of what countryside life is like and he gets a rude awakening.

One of the scenes features James Herriot being kicked in the face by a horse as he experiences farm life for the first time.

But Nicholas Ralph, who plays Herriot, said it was a great experience working with the animals.

READ MORE: All Creatures Great and Small channel 5: Who is actor Samuel West?

All Creatures Great And Small: Nicholas Ralph with a bull (Image: Channel 5) 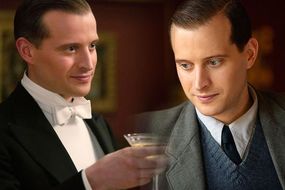 He told Express.co.uk and other media: "They were brilliant from day one, it was absolutely fantastic and they put us all at ease straight away.

"From day one we saw how well they were trained and looked after, and you just felt completely comfortable around them.

"So much so we had some scenes with a horse and there are some stunt scenes where it had to kick out and things.

"When we came to shoot the scene... the stunt double did it and I was watching it and thought maybe I would give it a try.

"Thankfully I managed to time it quite well and in the episode, I think it was actually me in there, so I was chuffed with that."

All Creatures Great And Small: The Channel 5 remake is a new adaptation of the books (Image: Channel 5)

PREV Loose Women's Nadia Sawalha on what she refuses to discuss on show 'Easy to be ...
NEXT Adele weight loss: How singer slimmed down by 7st following simple diet plan