CAROL MCGIFFIN - a panellist on Loose Women - has opened up about her cancer battle as the presenter spoke candidly about the impact of the disease on her body.

Loose Women favourite Carol McGiffin, 60, has discussed the "toxic side-effects" of chemotherapy after she was diagnosed with breast cancer in 2014. The former Celebrity Big Brother star opened up about her battle, after she also lost her sister Tracy to the disease three years ago.

Her sibling died at the age of 53, while Carol got her five-year discharge at the end of last year.

In a new interview, the ITV star discussed the reason she is only able to have blood tests taken in her right arm following treatment.

Carol explained that chemotherapy isn't a "pleasant" experience and said it has since caused issues with her body.

"The sickness and the side effects of six rounds of chemotherapy aren't pleasant," she commented.

Carol McGiffin addressed the impact of cancer and chemotherapy on her arms (Image: GETTY) 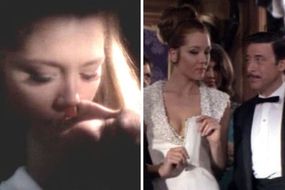 James Bond wife: How did Tracy Bond die? What happened to Bond's wife?

"The chemo I had was so toxic, I had to have injections in my hands and now my veins are completely shot."

Carol revealed that the lymph nodes were removed from her left arm.

"I can only have blood tests done in my right arm now because the lymph nodes were removed from my left and the veins were so knackered from all the injecting," the Loose Women host continued to OK! magazine.

The TV star went on to talk about her fears of cancer returning and Carol admitted "you always do" worry.

But the journalist and presenter added she isn't a "doom merchant".

PREV #BREAKING: It comes as restrictions have eased across the state’s southeast.
NEXT Adele weight loss: How singer slimmed down by 7st following simple diet plan