MULAN is the latest live action movie from Disney - but why are fans boycotting it?

Mulan is a new movie from Disney, following the life of the incredible woman who fought in battle to protect her family. The film was made as an animated movie in 1994, but is now on Disney Plus for fans to enjoy. But many have been boycotting the new movie – but why?

The star of Mulan, Liu Yifei, is an American-Chinese actress who has been in a number of Chinese movies.

The Disney film is one of her first Hollywood roles, but the views of the actress herself has caused controversy.

In August 2019, Liu shared an image posted by Chinese newspaper People’s Daily, which is one of the official newspapers of the Central Committee of the Chinese Communist Party.

Sharing the image on Weibo, a social media app, Liu included a quote from Global Times writer Fu Guohao, which read: “I support Hong Kong's police, you can beat me up now. What a shame for Hong Kong.”

Mulan - why are people boycotting it? (Image: Disney) 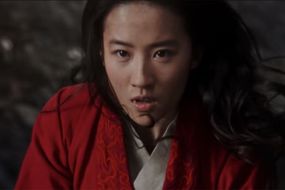 The image also included the hashtag: "IAlsoSupportTheHongKongPolice" with a heart emoji.

This sparked outrage in many fans who believed she was supporting police brutality against Hong Kong protestors, during what was a very difficult time for the people of Hong Kong.

At the time of her post, the tensions between Hong Kong and mainland China were escalating quickly, with tear gas, rubber bullets and bean-bag rounds being used to silence protestors.

At the Disney convention D23 Expo, Liu did not attend, despite a sneak preview of Mulan being shown, sparking further concern that she was being kept out of the limelight due to her comments.

Mulan running across roofs in the Disney movie (Image: Disney)

In February 2020, The Hollywood Reporter interviews Liu, asking about her comments.