Ragnar has only appeared in brief cameos in Vikings since his death in season four. However, fans of the History series have been desperate for him to return from the dead, with many certain he’s still alive. But it seems Travis won’t be reprising his role for the final run of the show as he has plenty of other projects lined up to keep him busy.

Vikings: Will Vikings season 6 be on Netflix or Hulu? 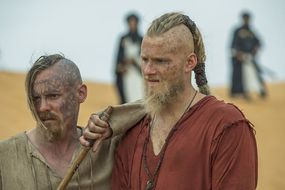 Vikings explained: Why did Halfdan choose Bjorn over King Harald?

Travis is currently starring in HBO Max’s Raised By Wolves but is set to appear alongside Colson Baker, also known as Machine Gun Kelly, in action thriller One Way.

The film will be directed by Andrew Baird and has been written by Ben Conway.

It was developed with funding from Northern Ireland Screen and Screen Ireland.

Speaking of the project, Highland Film Group COO Delphine Perrier said: “We are excited to partner again with the top-notch filmmaker team behind Zone 414 for this amazing new action-thriller.

Vikings: Ragnar Lothbrok was killed in season four of the series (Image: HISTORY) 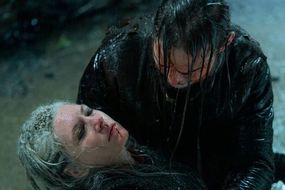 “When we read the script of One Way, we were captivated not only by the exciting action scenes, multiple twists, and unexpected ending… but also by the powerful message of survival and deserving