OUTLANDER follows the epic love story between Jamie and Claire Fraser through its ups and downs. But some fans may be wondering: Why does Claire fall in love with Jamie in the first place in the Starz series?

Taking its cue from the best-selling novels of Diana Gabaldon, Starz series Outlander follows star-crossed lovers Jamie (played by Sam Heughan) and Claire Fraser (Caitriona Balfe). Their romance began in the most unconventional after the 20th century time traveller accidentally ventured to the 18th century. But how did the pair find love with each other?

{%=o.title%}
Why does Claire fall in love with Jamie Fraser?

From the start, it was clear Jamie was sexually attracted to Claire, who simply wanted to get back to her husband Frank Randall (Tobias Menzies) in the 1940s.

Claire kept reiterating she was a married woman, who loved her husband and tried everything to return to him.

However, as time went on, Claire found herself getting to know Jamie and his clansmen better.

Just as they were building up a rapport, Claire was forced to marry Jamie, so he could protect her from Captain Black Jack Randall (also Menzies) who had tried to sexually assault her several times.

Outlander: Jamie and Claire Fraser's love is at the heart of the story (Image: CHANNEL 4 * SKY) 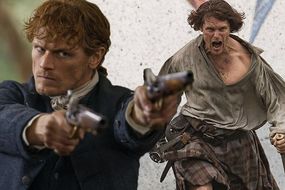 Through her marriage to Jamie, the Scotsman would be able to legitimately protect her from the evil Redcoat and his kind.

The marriage was a forced one which Claire had no say in and she reluctantly went along with.

Nonetheless, the turning point in their relationship came on their wedding night when the pair spoke frankly for the first time.

They also consummated their marriage and it looked like it was the beginning of their love as the pair seemed to connect through the act of sex.

Outlander author Gabaldon has previously said Jamie and Claire’s sexual connection is the bedrock of their marriage and has kept them together all these years.

Nonetheless, the pair have a deep connection which is also emotionally-rooted – something which kept their love for one another strong in the 20 years they were apart.

Speaking to Vulture in 2015, Balfe explained what attracted Claire to Jamie and why she ended up ultimately choosing the Highlander over her first husband and Oxford