THE THIRD DAY is a brand-new series on HBO and Sky Atlantic but how many episodes are there?

HBO and Sky Atlantic series The Third Day arrives this week and promises a viewing experience like no other. The show will be airing on both sides of the Pond and features an impressive roster of British acting talent. Express.co.uk looks at the new series.

{%=o.title%}
How many episodes are in The Third Day?

The Third Day started airing in America on HBO on Monday, September 14.

The show will be coming to British screens this evening (September 15) on Sky Atlantic at 9pm.

Episodes of the drama will be airing on a weekly basis for viewers to enjoy.

The Third Day is split into three intertwining stories set during different seasons in the year.

Here is a list of episodes from The Third Day

The Third Day is set on a mysterious island (Image: SKY) 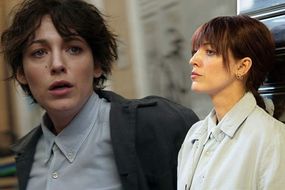 The first story takes place in the summer when a man called Sam (played by Jude Law) travels to an island and quickly finds himself cut off and at the mercy of the local residents after high tide washes away the only road to the mainland.

In the second tale set in the autumn, viewers will be treated to a live story filmed in one take across London.

Finally, the third story is in winter and sees another person – the strong-willed Hannah (Naomie Harris) venturing to the strange island called Osea in search of answers.

Once more, they will be confronted by the residents of the island and their insular ways.

The show has been written by Dennis Kelly, the