PRINCE HARRY is unlikely to have spent his birthday with much of the wider Royal Family even if he had remained in the UK according to royal expert Brittani Barger.

Currently the Duke and Duchess of Sussex are living in California with their son Archie. The couple stepped down from front line royal duties at the end of March. 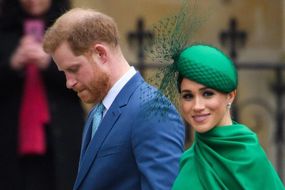 According to Ms Barger, deputy editor of Royal Central, he is likely to have spent the day at home with Meghan and Archie.

She added other senior royals will likely “miss not being able to celebrate him” but they will still be able to see each other via video calls.

However, speaking to the Daily Star online, Ms Barger pointed out that even if the Duke and Duchess had remained in the UK they “couldn't have spent his birthday with many family members”.

“I'm sure they will miss not being able to celebrate with him" (Image: GETTY)

Currently the “rule of six” means it’s illegal for any more than six people to socialise together in England, Scotland and Wales.

In England this even applied to under 12s, like Archie, whilst in Scotland and Wales they are exempt.

This means Harry and Meghan would be able to have a maximum of three guests to their Frogmore Cottage home near Windsor.

Ms Barger said: “I'm sure The Queen will call him, as will his father and brother.

Harry and Meghan pictured with their son Archie (Image: GETTY)

“I'm sure they will

PREV Gig economy job surge may be behind surprise fall in unemployment
NEXT Adele weight loss: How singer slimmed down by 7st following simple diet plan