QUEEN OF THE SOUTH is filled with powerful and dangerous women. But does Camila Vargas die in the crime drama?

Queen of the South is about the journey of Teresa Mendoza (played by Alice Braga), who started off as a money changer before meeting boyfriend Guero (Jon Ecker). Guero was a key member of the drug world, working for Don Epifanio (Joaquim de Almeida) and so Teresa soon became entangled in the underground life. Then after living a life of luxury with Guero, one phone call changed everything.

Guero had warned Teresa that if this particular phone ever rang, he was dead and she needed to make a run for it as someone would be out to get her.

When they accidentally parted ways, Teresa ended up being captured but this time it wasn't Don Epifanio's men.

Instead, the thugs were working for his wife Camila Vargas (Veronica Falcon) who had taken a liking to Teresa and decided to bring her to Dallas.

Queen of the South: Camila trusted Teresa to be part of her inner circle. (Image: USA Network) 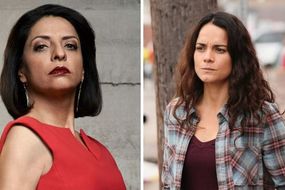 Queen of the South blunder: Glaring mistake with Camila’s escape

As the Queen of the South continued, Camila began to trust Teresa and allowed her into her inner circle.

So along with James Valdez (Peter Gadiot), Camila kept Teresa close and taught her the tricks of the trade.

This meant Teresa was safe from Don Epifanio and she was learning how to protect herself in the drug world.

However, this proved to be a major mistake on Camila's part.

Queen of the South: Teresa threatened to have Camila's