Tonight’s Great British Bake Off will see the contestants tackle cakes and there will be plenty of treats to sample. While judges Prue Leith and Paul Hollywood always try each baker’s treats, host Matt Lucas has admitted it was a little too much for him and he gave up trying them all. 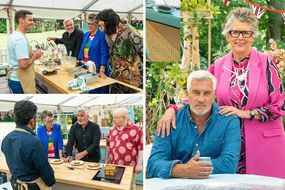 Bake Off 2020: How many episodes are in The Great British Bake Off?

“I wasn’t sick but I definitely never tried all the cakes after that.

This year’s series will be the first to be shot amidst the coronavirus pandemic and Matt was happy to reveal the secrets of filming.

READ MORE: Bake Off 2020 location: Where is The Great British Bake Off filmed?

Bake Off host admits they ‘definitely never tried all the cakes’: ‘It was a lot’ (Image: CHANNEL 4)

Bake Off host Matt Lucas said he made the mistake of sampling 12 Battenberg cakes straight away (Image: CHANNEL 4) 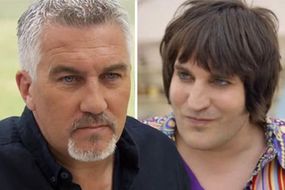 “We did something I don’t think any other production had yet done,” he noted.

“The makers, Love Productions, hired a hotel and we had a skeleton staff working in the hotel of about 25 people.

“Everyone who was working on the show lived in this hotel and the tent was put up in the grounds.

“It was amazing. We did things in the evening. I hosted bingo one