President Trump said he wished Prince Harry “a lot of luck” with his wife Meghan Markle during a press conference. It comes after the Sussexes urged Americans to vote in the upcoming US election.

During the press conference at the White House, a journalist said to Mr Trump: "Prince Harry and Meghan Markle chimed in on the US election and essentially encouraged people to vote for Joe Biden.

“I wanted to get your reaction to that."

Mr Trump responded: "I'm not a fan of hers, and would say this, and she has probably heard that, but I wish a lot of luck to Harry, because he's gonna need it.”

The Duke and Duchess of Sussexes made the broadcast from California as part of the Time 100 list on Wednesday.

Meghan Markle and Prince Harry made the broadcast from California as part of the Time 100 list (Image: Time Magazine )

Prince Harry told US citizens to “reject hate speech” during the announcement.

He said: "When the bad outweighs the good, for many, whether we realise it or not, it erodes our ability to have compassion and our ability to put ourselves in someone else's shoes.

"Because when one person buys into negativity online, the effects are felt exponentially. It's time to not only reflect, but act."

Prince Harry is not actually eligible to vote in the US and has never voted for an election in the UK due to traditions upheld by the Royal Family.

READ MORE: Meghan Markle and Harry ordered to ‘LEAVE’ US by Trump’s ex-advisor 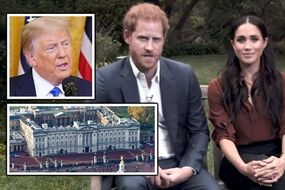 Prince Harry SHUNNED as royals distance themselves from election views 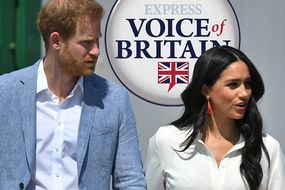 But as a US citizen, the Duchess is able to vote in November’s election.