FARGO season 4 will be arriving very soon to screens after the premiere date was pushed back from the spring to the autumn. But who is in the cast of the new series of Fargo?

Offbeat anthology series Fargo is going to be back for one last outing. This time the show will be taking place in the 1950s with two organised crime groups at war. Express.co.uk has the lowdown on the show.

Season four of Fargo will be coming to screens later than expected with the original April premiere date postponed to September 27 due to the coronavirus pandemic.

There will be 11 episodes which will be airing on American network FX on a weekly basis following a double-bill premiere.

Those with a Hulu subscription can watch the series the following day on the streaming platform via FX.

Fargo season four features a stellar cast with stars from both sides of the Atlantic. 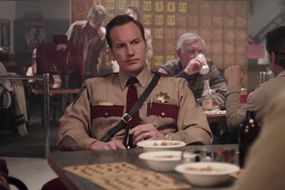 Comedian Chris Rock gives a straight turn as Loy Cannon, the head of a crime syndicate.

The Hollywood actor, producer and stand-up is no stranger to screens and boasts a career spanning since the Eighties.

His biggest roles are Longest Yard, Lethal Weapon 4 and I think I Love My Wife, along with his television credits which include Everybody Hates Chris, The Chris Rock Show and Saturday Night Live.

Rock has also lent his voice to various films over the years including the Madagascar franchise, Osmosis Jones and Bee Movie.

Fargo season 4 is led by Chris Rock in a straight role (Image: FX)

Schwartzman is another big name with a multitude of titles to his CV including Rushmore, The Darjeeling Express Limited, Moonrise Kingdom and Scott Pilgrim vs. the World.

Rapper Offset livestreams himself being arrested in Beverly Hills

NSW records another day of no community transfers of COVID-19