RATCHED is Ryan Murphy's latest series for Netflix following on from the glossy Hollywood and the second season of satire The Politician earlier this year. Many viewers of the One Flew Over The Cuckoo's Nest prequel show are curious to know: Where was Ratched filmed and where's it set?

Netflix horror fest Ratched arrived on Friday, September 18 as the show shot to number one on the streaming platform across the world. Ratched - from American Horror Story creator Ryan Murphy - is the origin story of the monstrous head psychiatric nurse from Oscar-winning movie and Ken Kesey's seminal classic One Flew Over The Cuckoo’s Nest. Fans have been working their way through all eight episodes and have questions, particularly about the filming locations.

Ratched takes place prior to the events of One Flew Over The Cuckoo’s Nest, which is set in the 1960s.

The show is set in 1947 in Northern California with the drama taking place at the prestigious and fictional Lucia State Hospital.

The facility is at the cutting edge of mental health treatment for the time and the hospital’s patients feature prominently.

In fact, the Lucia State Hospital feels like a character unto itself full of secrets and many horrors have been witnessed within its walls.

READ MORE: Ratched season 2 Netflix release date: Will there be another series?

Ratched saw most of the exteriors filmed at the King Gilette Ranch (Image: Netflix) 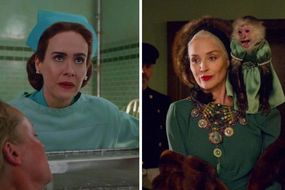 Ratched Netflix release date, cast, plot: When is Ratched out?
Where is Ratched filmed?

According to Backstage, filming on Ratched started in 2019 in Los Angeles.

Among the locations used for the shoot were Santa Monica and Monterey.

The programme-makers have wonderfully recreated the 1940s aesthetic for the show, including pops of bright colour.

Although Lucia is a real place, located near San Francisco and Santa Barbara, it doesn’t have an asylum there.

Ratched was filmed in various places in California in 2019 (Image: Netflix)

Instead, King Gillette Ranch near Calabasas was used – the building was originally constructed for shaving razor businessman King C. Gillette in the 1920s.