BRAD PITT - the Hollywood actor and film producer - is reportedly not "angry" with his new girlfriend Nicole Poturalski, after she allegedly directed an Instagram post at the star's ex-wife Angelina Jolie.

It has been reported Hollywood sensation Brad Pitt, 56, is not "angry" his girlfriend Nicole Poturalski allegedly aimed one of her Instagram posts at his ex-wife, Angelina Jolie, as he is "happy" he has found someone who makes him feel "loved". It comes after the model shared a cryptic post last week, which read: "Happy people don't hate."

They are totally falling for each other.

Nicole's post, which has now been deleted, showcased her slim frame in an orange dress.

She decided to caption the post with: "Happy people don't hate," followed by a series of love heart emojis.

Now, it has been said Brad is "cool" about her remark, which people have speculated as being directed at Angelina.

Brad was allegedly not "angry or upset Nicole made a remark about 'happy people don't hate'", according to sources.

Brad Pitt happy he has found someone who makes him feel 'loved' (Image: Getty) 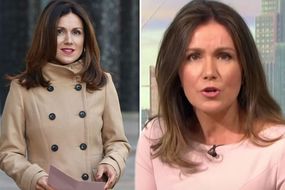 They continued: "For it to become this thing that suddenly everyone was talking about should have been surprising to Brad.

"At this time in his life, Brad is just happy that he has found someone that makes him feel cherished and loved."

Soon after Nicole shared her post online, many waded in to speculate what she was getting at with her message.

One replied: "If so, then why [do] you & Brad hate Angelina.

PREV ‘Frankly insulting’ - MPs under fire over potential pay rise despite UK's ...
NEXT Jamie Redknapp in admission about family ‘rows’ ‘That’s not easy’