THE HAUNTING OF BLY MANOR will be coming to Netflix very soon but who is in the cast of the latest instalment of the horror anthology series?

Netflix will be dropping The Haunting of Bly Manor on Friday, October 10 with nine episodes hitting the platform for people to binge through. The new series follows on from the success of 2018’s The Haunting of Hill House. However, this is a completely different story which is loosely based on the horror classic The Turn of the Screw by Henry James.

Both Bly Manor and Hill House are part of the horror anthology series known as The Haunting.

Should the show return for a third outing, fans can expect a brand-new spooky property filled with dark secrets and spectres lingering in the shadows.

Much like American Horror Story, The Haunting also has a cast of actors returning to the show to take on different characters.

Express.co.uk looks at the cast of The Haunting of Bly Manor, which features some familiar faces and some new ones.

The Haunting of Bly Manor will feature a brand new story (Image: Netflix) 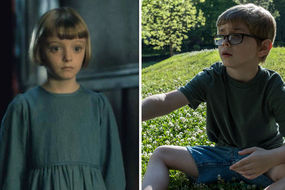 American actor Henry Thomas returns to the anthology series, this time as estate owner Henry Wingrave who hires a new nanny to care for his orphaned niece and nephew at Bly Manor.

Thomas is a former child star with his breakout role in ET: Extra Terrestrial propelling him to global stardom, however, he’s also become a successful actor since with numerous credits to his name.

He has starred in Gangs of New York, I Capture The Castle, All The Pretty Horses and Moby Dick among other roles.

According to IMDb, he will next be featuring in TV series Midnight Mass and film Barely Afloat.

The Haunting of Bly Manor will see some cast return (Image: Netflix)

Victoria Pedretti is also back in The Haunting

PREV A small boy, 3, found a gun in his parents’ bedroom drawer and accidentally ...
NEXT Jamie Redknapp in admission about family ‘rows’ ‘That’s not easy’

Cartier watches may outrage the PM but he should clock these scandals for true ... mogaznewsen