MARRIED AT FIRST SIGHT UK is back on screens for season 5 and fans are keen to learn what the couples are up to now. Are David and Shareen still together?

Married At First Sight UK has returned for its 2020 series on Channel 4 and fans have been looking forward to watching more impromptu weddings each week. The quirky series sees a panel of matchmakers pair up individuals at a wedding ceremony before they have had a chance to meet in person. There have been some awkward moments between David and Shareen, and fans are wondering if they are still together.

{%=o.title%}
Are David and Shareen still together on MAFS?

The latest season of Married At First Sight UK saw a potential blossoming relationship between David and Shareen, as they seemed to have lots in common.

They both shared a love for travel, and they also admitted to being physically attracted to one another when they first laid eyes on each other at the wedding.

David, a 56-year-old sales director had called Shareen "gorgeous" and "stunning", and he said he could not wait to get to know her. Shareen agreed that she "fancied" David.

But during their honeymoon things took a bad turn after David surprised Shareen, a 47-year-old events manager with an unusual wedding gift.

She also seemed to take issue with his tattoos and his "survival kit" he had taken along for the honeymoon trip.

READ MORE: Married At First Sight UK 2020: What happened to Michelle and Owen? 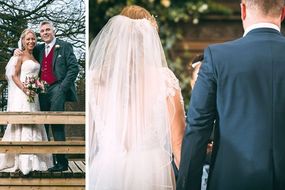 Married At First Sight UK 2020 cast: Who is in the cast of MAFS UK?

Fans sided with David on this occasion, saying Shareen was being "stubborn" and she was not giving David a chance.

The couple were asked to spend lockdown living together and fans are keen to find out whether they managed to settle their differences.

Both had agreed the intimate side of their relationship would develop in time, with Shareen feeling less enthusiastic about the relationship.

She is a mum to three adult daughters and she moved from South Africa to start a life in Wales.

She has not been married before, and so fans are hoping she makes the most of her opportunity with David. But the couple have been sworn to secrecy so fans will not find out whether they are still together until the series has finished airing.

David had been married for 10 years, and he has two

PREV Try your hand at this #Ozark quiz if you believe you are the ultimate fan
NEXT Martin Lewis shares how Tesco customers can save hundreds on their Christmas ...

How many members have there been in The Beach Boys?