ORIONIDS, October's annual meteor shower, will hit its peak this week, much to the delight of stargazers and astronomers alike - Express.co.uk presents everything you need to know about the Orionids 2020.

A waning Moon has set the scene for a stunning shooting star show this week, as the Orionid meteor shower approaches its peak. This means you can expect an almost inky black sky to provide an almost perfect backdrop for spotting this annual phenomenon over the next few nights.

{%=o.title%} What is the Orionid meteor shower?

Hunting for meteors, like the rest of astronomy, is a waiting game, so it's best to bring a comfy chair to sit on and to wrap up warm as you could be outside for a while

The Orionid meteor shower are simply the result of sand-sized cosmic dust and debris left from Halley's Comet.

These are the detritus from the famous comet of them all – Halley – left behind from its innumerable orbits around the inner Solar System.

When the Earth's annual orbit takes it through this comet-made cloud, extraterrestrial dust collides into our upper atmosphere and incinerates.

This results a natural firework display easily visible from the ground, in a phenomenon colloquially known as shooting stars and maybe even the odd fireball.

Orionids 2020: A waning Moon has set the scene for a stunning shooting star show this week (Image: Getty) 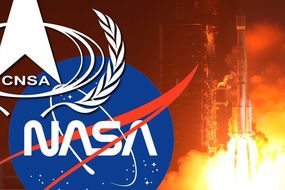 The Orionids are known to enter Earth’s atmosphere at unimaginably fast speeds of approximately 147,000mph (66 km/s).

A significant number of these meteors leave gorgeous lingering trails lasting as long as a few seconds.

And some of the slightly larger particles may even fragment and break-up in an even more spectacular fashion, creating even brighter fireballs.

The Orionids are one of the most eagerly anticipated meteor shower of the year.

PREV RT @expressceleb: Lorraine Kelly 'knew something was badly wrong' with Phillip ...
NEXT Jamie Redknapp in admission about family ‘rows’ ‘That’s not easy’